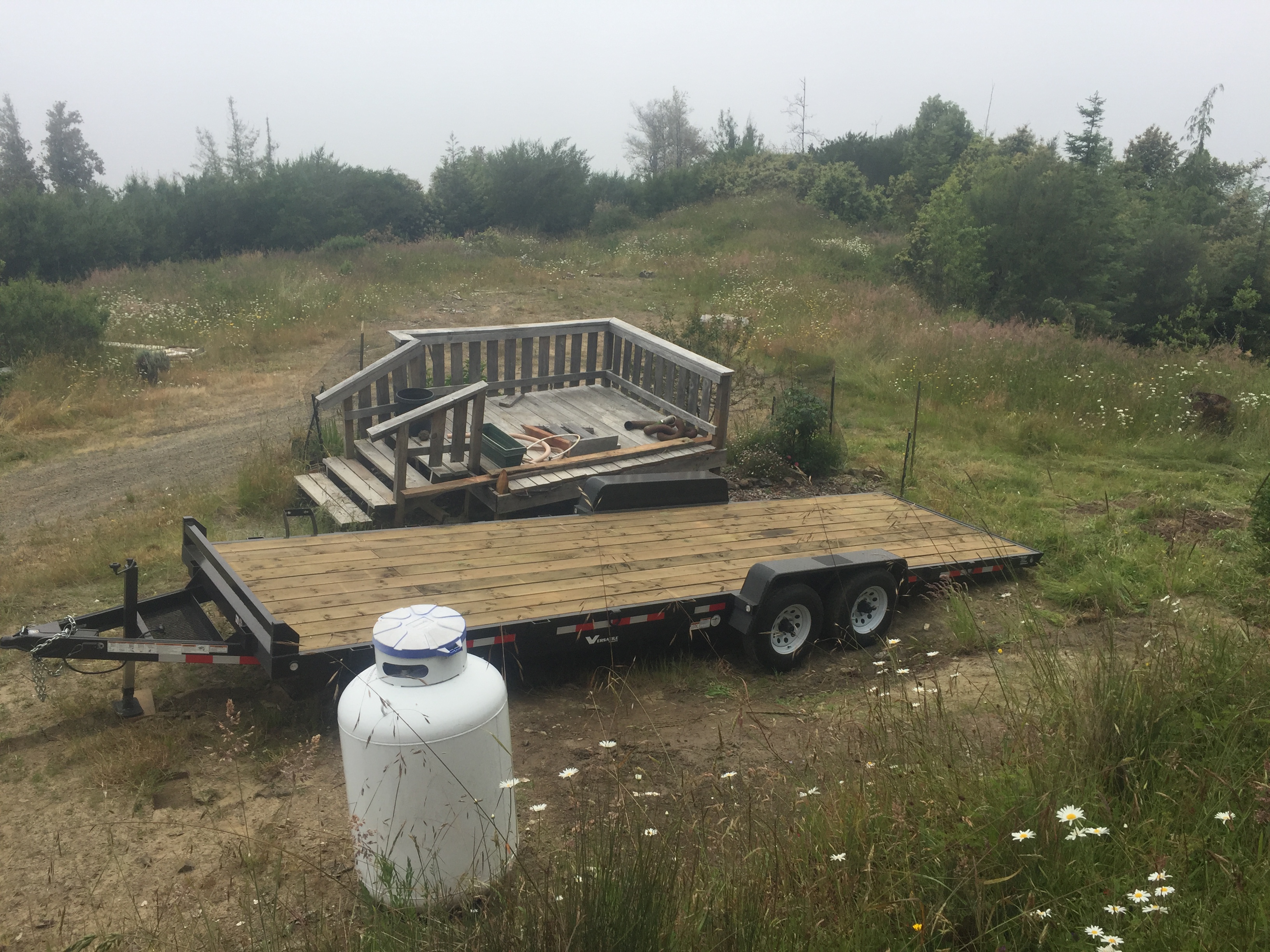 It’s for our Mom. She needs one and my sister and I want to give that to her. The cool thing is, we are not alone.

10 years ago my Mom moved out to California to be with me and my family. She bought a 33′ RV trailer when she first arrived, and over the years it has since deteriorated.  She bops back and forth from here to Chicago where my sister, and all the rest of our BIG family mostly reside. The idea of building her a tiny house came when I took a good, hard look at her (our) options for her living situation.

A few years back I had got a quote for a metal carport to protect her vulnerable roof top (even though I was worried that our hurricane strength winds would certainly carry it away!) It was going to run about $5000 to cover a 33’ long (I forget how tall, but really tall RV! I was not prepared for it to cost that kind of money, and my Mom (and we) simply didn’t have that laying around. But what I did think I had, was a tiny house laying around in storage! I realized that I had a decent amount of lumber leftover, some roofing…some real building supplies….enough for a good start on a tiny house.By this time the realization of the condition of my Mom’s RV had set in. I knew that it could not take any more winters up here, without a heavy-duty tarp over the entire top. Which by the way, is not a great look, nor is it healthy for ventilation. Because it spent 9 miles up fickle hill exposed openly to harsh rain, wind, and snow, the ceiling, the walls, and the floors were saturated constantly, tarp or no tarp. The RV’s fate was inevitable, sell it while it still has some life, or watch it become trash. I hated my Mom living in it, and I wanted her to move into our house, but she is a woman who cherishes her own space, and refused. I knew I had to something. 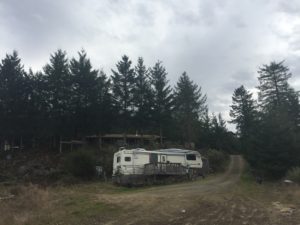 Over the years we have remodeled many different things with our house. It had once upon a time been a duplex, and we turned it into our home. I had/have windows, doors, a toilet, a sliding glass door, stove pipes, a propane heater, lumber, wiring, supplies all over the property. I was imagining a tiny house in my head from all the supplies I had in my storage, wishing and hoping I could put it all together for her some way? I saw an article in a magazine that said, “build this small hunters cabin for about $4000.” It said on the cover too, “Anyone with basic carpentry skills can build this!” Well, that was it!  I decided right then and there, I was going to just build my Mom a tiny little cabin. The problem with that my friends is that, even if you have acres of land in California, the state, and the banks do not want another structure on our land, or we would decrease the value of it. So, in lieu of that, the answer to my prayer for my Mother and her situation, was that I would buy a trailer, and build her a tiny house on that. That decision was in last October (2016)

Everything I have done since that date has been leading me to this moment.

The build will begin the 2nd week of August, 2017, when my biggest supporter, confidant, and cousin Timmy Bottger will be here with his daughters (and they will all be refreshed and ready from their backpacking trip in the Trinity Alps.) He (and his wife Amy) have been my biggest supporters because they were the first ones who took me seriously. And they acted, on my behalf. It meant SO MUCH!

He started working on plans right away and then thought to ask his local window dealer in Minnesota (that he had purchased some windows for his own house in the past) if they might have some leftovers they pulled from a house, to replace with their fine, triple paned, crank out windows? Their response? 4 beautiful windows for my Mom’s house!

My cousin Timmy came up with the final plans for my Mom’s house. He is a hard working self-employed engineer (Genesis Tek), busy family man, but has also been working diligently (pro-bono, aka FREE) for this project for my Mom and myself because he loves us, because we are family. I don’t know that he can possibly know how much his support has meant? But he knows I’ll die trying!

I have to shout out and thank people who donated to the Go Fund Me for my Mom’s tiny house. My generous Uncle David, who was within seconds to help his sister, my wonderful cousins Juliet, Leah, and their Mom, their awesome Dad, my Uncle Brett, Tracey and Kathy, you know you girls rock! Aunt Toni and June, you ladies haven’t been “official” family member for years and yet you are still part of the family, and truly so special to us! Your support for my mom in her time of need means so much! Talk about generosity-you guys gave at Christmastime of all times! Without that, Mom wouldn’t have a deposit down payment for the trailer, but more than that, I could have lost hope and heart without your early support. My cup overflows!

I will post weekly updates. Thank you for your interest in our project. We are beyond excited to get ‘er done!